Attracting investment supportive of recreating Louisville as the most sustainable city in North America is central to the Green administration’s economic plan. Beyond more conventional approaches, we will achieve this objective by installing solar panels on many metro-owned properties (creating a metro owned power company) and by the widespread re-development of many under-performing urban properties into viable commercial space, urban housing and green space. This construction boom will not be patterned after the OMNI model – giving away public treasure, public land and permission to destroy our architectural heritage.  This construction boom will be driven by public demand and market forces. The plan depends on taking action that will increase two elements. The first is increasing the desire of people and business for urban housing and commercial space. The second is increasing the desire of surface parking lot owners to redevelop their property as commercial and residential space. Spin-off benefits of the plan will be safer urban streets, less flooding and urban heat, a stronger public transit system with greater ridership, greater walkability in urban Louisville, the creation of  Louisville as a city where one can live comfortably without a car, a reduction in the destruction of farms, fields, forests and flood plains, a reduction in the 33,000,000 miles driven daily in the region, cleaner air and water, more equitable transportation, more smaller-scale (less disruptive) urban construction projects (jobs), and greater demand for intercity passenger rail.

One of the beauties of the plan is in how quickly and inexpensively the plan can be initiated. So how do we accomplish this major transformation? We do so by:
… reducing the length of TARC bus routes to within a ring radiating six (+/-) miles from downtown Louisville
… establishing dedicated bus (and emergency vehicles) lanes within that six mile radius/ring
… giving buses (and emergency vehicles) the right of way at urban intersections
… changing one way streets to two way streets
… programming urban traffic signals to blink yellow or red but never green, resulting in much more cautious drivers
… establishing a downtown bus depot (one city block surrounded by bus stops of every route), creating easy transfer from any route to any other route in a central location (TARC’s Union Station is too far from the central business district)

The immediate result of this plan will be:
… an increase by several fold in the frequency and speed of TARC service where it counts (the suburbs are hopelessly car dependent, focus on improving the urban service)
… the elimination of the long, time and resource consuming TARC trips to the exurbs
… much greater TARC ridership, cycling and walking
… safer urban traffic

As the owners of urban surface parking lots realize that their customers are now parked six miles away and riding TARC from there into town, they will redevelopment the surface parking lots as mixed use – residential and commercial. Urban Louisville will experience an investment boom and take on a new life as people move in closer to work.

What are the expenses of implementing this plan?
… no extra expenditures on TARC
… staff time resetting some manual traffic signals
… re-stripping of major streets within the six mile ring
… working closely with KY Transportation Cabinet to convert KY controlled one way streets to two way

And what about the remote businesses who depend on TARC to deliver their workforce?
Those remote employers are over-stretching TARC service, weakening the overall public transit service, and burdening their low income employees who have to ride for hours daily on the bus. Those employers may need to provide their own better/quicker transportation for their employees.

With these changes the stage is soon set for the successful expansion of TARC service into the next ring of neighborhoods. The demand for intercity passenger rail grows.  Regional land use and transportation is transformed. And the attention of investment committed to creating a sustainable Louisville is captured. 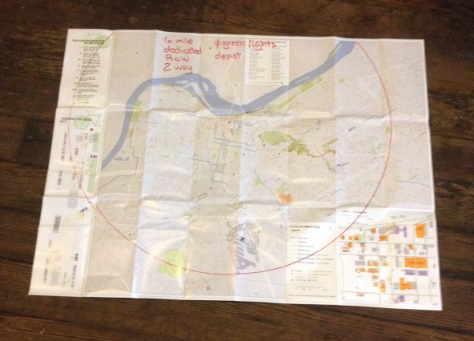